Why is msbuild and link.exe "hanging" during a build?

We have a few C++ solutions and we run some build scripts using batch files that call msbuild.exe for each of the configurations in the solutions.

This had been working fine on 3 developer machines and one build machine, but then one of the projects started to hang when linking. This only happens on the newest machine which is a quad core, 2.8ghz I think. It runs on Windows Server 2003 and the others are on XP or Vista.

This happens consistently even if I change the order of builds in the bat file.

If I run the build from the IDE on that machine it does not hang.

Any ideas about what could possibly be causing this?

I see now that when it is hung the following are running:

The exe file exists and so does the pdb file.

The exe file is locked by some process, and I can't delete it or move it. I can delete the pdb file though.

I also have the problem if I just use VCBuild.exe.

When I attached the debugger/MSdev IDE to them I got a message box saying that the application was deadlocked and/or that "all threads have exited".

I guess I will have to check for a service pack for that msdev install on that machine.

In the debug.htm output file I get all sorts of stuff output after the link.exe command is generated.

However, for the release buildlog.htm the linke.exe line is the last line.

This is clearly a hang in the linker. Definitely a Microsoft bug.

I am now trying to figure out what the .rsp (linker response) file is.

That is the last line in the release build log. The debug one has lots more information after that.

Reinstalling a different version of Visual Studio did not solve the problem.

I will open an issue/ticket with Microsoft. I will post an answer if I can.

Whole-program optimization (/GL and /LTCG) and /MP don't mix -- the linker hangs. I raised this on Connect.

The upshot is that it's a confirmed bug in VS2008; contact PSS if you want a hotfix; and the fix is included in VS2010.

If you can't wait that long, turn off /MP (slower compiles) or /LTCG (slower code). 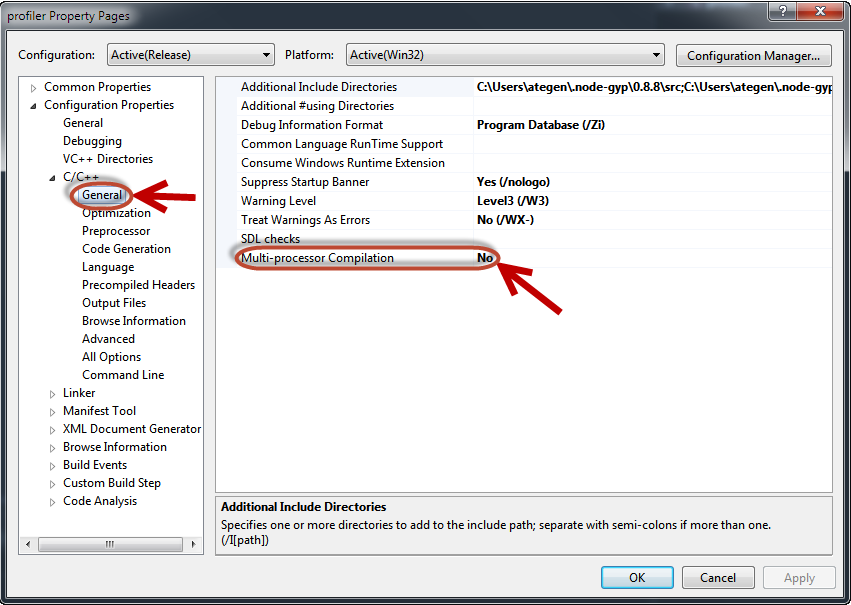 I had a similar problem, but with Visual Studio 2010.

This is a project that had worked fine on another computer, but just not my new one. The symptoms described matched the original Visual Studio 2008 Issue.

http://www.microsoft.com/download/en/confirmation.aspx?id=23691 - or just go to microsoft and search for "Visual Studio 2010 Service Pack 1"

I had run my windows "check for updates" and had thought I had installed all service packs, but apparently, I had not installed any Visual Studio Service Packs.

After installing the VS2010 SP1, I no longer had this issue. I confirmed that I had installed VS2010 and the Service Pack 1 on other older computer with the working project a while back.